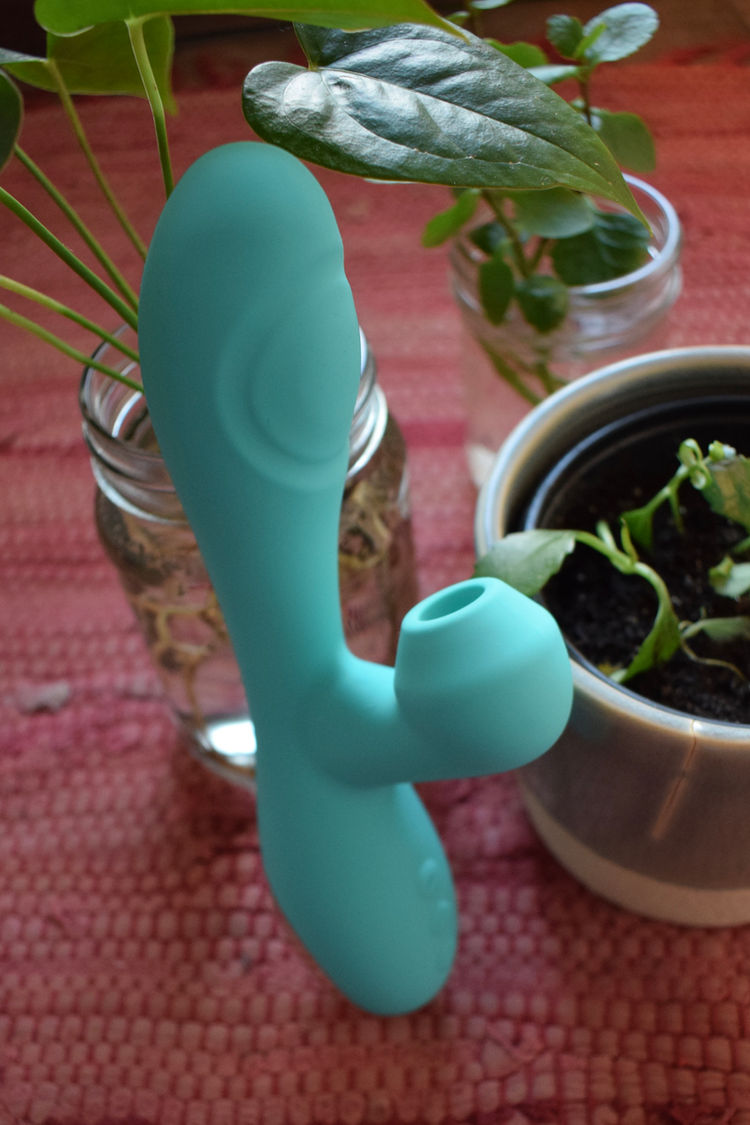 Eros and company offered me a good discount a few months ago on the items I wanted to order as part of a collaboration. Eros et cie is a Quebec company with several branches all over Quebec and, even if I’m not their target clientele, I found some cool gadgets to try and review! The first being the Performera stylish toy rabbit using two pressure technologies, acupressure and air pressure. It is for me a perfect toy for crossettes quickly done, well done; my body’s response to both stimuli is incredibly fast and strong, almost too muchwhich means that I have a relationship a little bittersweet with this toy.

The Orrformant is a kind of vibrator, but isn’t exactly one either; the shaft is inserted inside the vagina to stimulate the inner part of the clit (G-spot) with a pressure mechanism that moves quickly back and forth, and the other part does air pressure, or suction, on the glans of the clitoris. The toy is covered in medical grade silicone as well as mirrored ABS plastic on part of the handle, then it is rechargeable using a magnetic USB lead, making the Performant highly water and water resistant. easy to clean. It comes without box or instructions, simply sealed in plastic and inserted in a velvet pouch, with no extras or fluff. It only comes in this gorgeous aqua color, or teal as I just learned is the equivalent of teal in english (cutest color name ever!!) and it is sold by Eros for $109.99. However, I have not been able to find the manufacturer of this gadget.

In terms of proportions it is 22cm in total length with 10.5cm insertable, the diameter being 4.2cm at the widest and it is held on well using the handle at the base. The three control buttons allow you to turn on, off, operate the two stimulation modes separately and simultaneously as well as manage the strength of the toy and its patterns. With the Performer you can navigate between three speeds, both for suction and for acupressure, and four patterns of suction, and it does so in a way that sometimes seems random with the various control buttons, making me wonder why it doesn’t come with a little instruction manual. Also, a light increases and decreases in intensity in coincidence with the speed and the mode on which the gadget is turned on.

The Performer is exactly as the name suggests, definitely a performance toy, a go to if I want a quick orgasm without having to think about anything. Same as in the case of this gadget, it’s better that I don’t think of anything if I want to stuff at least 2-3 minutes!

By using it, I have the impression that my body reacts mechanically to stimulation rather than by desire or desire to orgasm. That’s not necessarily a bad thing, but I don’t consider it to be entirely a good thing either, at least for me. Because it’s true that sometimes I want a good quick orgasm to relax or fall asleep, that it doesn’t always have to be an exciting and sensual experience. On the other hand, masturbation is important enough for my sexual health, and this since childhood, that I dedicate a special place to it in my routine, allocating to this practice the time it requires, and I find it almost a shame to coming so fast and so hard without really having any leeway in how quickly it happens.

That doesn’t take away from the fact that it’s a very good quality gadget that doesn’t make too much noise when placed well on my body, although it’s not particularly quiet. I’m lucky that this toy rabbit works perfectly with my body shape; the internal pressure hits just the right spot, making me want to pee right away (usually a good sign), and the suction part sits directly over the glans of my clit. Except that, as with the vast majority of vibrators and especially rabbitsunfortunately this cannot be a winning formula for all body shapes.

Compared to the acupressure mechanism on the handle, which exerts pressure inside the vagina through a round section that makes a tap-tap-tap repetitive, I feared that it would fail if I tightened the pelvic muscles too much, . But it was denied! I squeezed the incredible muscles of my vagina as hard as I could and everything went on as if nothing had happened! On the other hand, it is preferable to start the mechanism only once it is inserted, because it is rather uncomfortable to put it on while it is running.

I rarely use styling toys rabbit because I like to stimulate my vulva first before inserting anything into my vag, preferring to get a little wet or at least warmed up, but with a good water lube the Performant is easy to insert to begin with to take advantage of it. I’ve only used it by myself and I’m not interested in trying it with a partner; I find it a little too intense and then as it covers all my parts, I find it less borrowing to be managed in addition to being with another person.

I mentioned earlier that the control buttons for the toy’s different stimulation modes can feel random and I find it important to mention this, especially since it comes with no written or video instructions for getting used to them before use. After multiple trials and taking mental notes, I will try to summarize the control modes:

These are the main functions of each button, but all three will somehow handle both functions. Also, both types of pressure can’t be turned off when turned on, at least when the two are gone together…phew. When I use it, I just make sure everything is open, that I like the speed or the mode, and I let it do its thing without touching it, otherwise it becomes too complicated.

Who knows if there’s actually any logic behind the control mechanism of this capable gadget (it’s certainly not easy to figure out if there is).

As I also mentioned earlier, I am clearly not part of the target clientele of Eros and company, except that I sincerely believe that sexus shops need all tastes, all colors and all flavors (even vanilla). So it’s probably no surprise that I tell you that it’s not by blows of ‘for her’, ‘for him’, ‘for couple’ as well as to confuse fetish with kink or BDSM* and to mega genre its descriptions of toys that a company moves me or makes me believe in an effort to be inclusive. But as I said, I’m not their target clientele and there’s always room for improvement for everyone, including sexus shops! They still have very nice toys from recognized luxury companies, their nice house brand, Pink Eros line, as well as other simple and inexpensive toys. Then in addition, we have a promo code for you, dear readership of my heart! : 15% off using the code “GADGET”!

The Performer is a toy that is made to be used by people with a vagina and a vulva, and I can recommend it to those who enjoy penetration as well as clitoral stimulation, both internal and external. It’s a toy that could easily be too loud and too intense for some more sensitive people, and it might just be perfect for people with less sensitive parts. In the toys category rabbit, it is average in terms of ease of use; forgetting the confusion with the buttons, it holds up well and can be used hands-free once it’s installed and gone to the desired mode. My arms aren’t particularly long so I prefer to set it up and not hold it until I come or it gets too intense because otherwise it gets uncomfortable for my shoulder and hand.

I certainly have a contradictory relationship with the Performerfinding it really fun because it works so well with my body that I don’t need to be super exhilarated to experience particularly strong orgasms in its company, but this same fact is also constraining when I want to take my time and feel myself. This toy, I keep it near my bed in times when I don’t feel like breaking my head, when I don’t have the energy to put a lot of time into my crossette session or when the video I chose instead of my imagination lasts only a few minutes. It could easily become your favorite gadget, or at least a safe bet promising powerful and fast orgasms every time!

* In short, a fetish is a specific item that is required to be able to feel arousal and sexual satisfaction. A kink is rather an alternative sexual practice or one that goes beyond the “norms” established in society. Practices kinky are no longer considered exploratory, but are not not required by people practicing them to feel sexual pleasure.